Are you watching Wednesday on Netflix?? I love the Edgar Allan Poe references in the show. Poe actually DID put hidden messages in his poems and stories. His poem A Valentine is an example. Poe even teaches the reader how to solve secret messages in The Gold Bug. Enjoy!

I've been converting the site to a PWA (Progressive Web App) so you can install the site on your mobile device home screen. I just tested it on iPhone and Android. Try it and let me know if you have any issues.

I just updated the World Map with pins for every person who has signed the guestbook. There are 443 new pins for a total of 5,651. New pins were added for Finland, Belgium, Netherlands, France, Portugal, Ghana, India, Australia, China, Philippines, Dominican Republic, and of course many cities in the U.S.

Don't worry, I didn't forget you! I'm working on updating the Guestbook signatures.

I just wanted to make a post here about COVID-19 in case a future generation finds this site. Around 1842, Poe wrote the cautionary tale, Masque of the Red Death, about a group of wealthy people hiding out in a castle to escape the plague. You'll have to read the story to see how that worked out.

Now, in 2020, we have been confined to our homes for months because of the COVID virus. Many cannot work, while the rest of us try to work from home. At least I am happy to see people using this site for both education and enjoyment. Hang in there!

This site contains short stories and poems by Edgar Allan Poe (Edgar Allen Poe is a common misspelling), story summaries, quotes, and linked vocabulary words and definitions for educational reading. It also includes a short biography, a timeline of Poe's life, and links to other Poe sites.

Most people recognize Poe by his famous poem, "The Raven". Others may have read one of his more popular dark and creepy tales like, "The Fall of the House of Usher" or "The Tell-tale Heart". Poe wrote quite a few gothic stories about murder, revenge, torture, the plague, being buried alive, and insanity. Many modern books and movies have "borrowed" ideas from Poe. Some of Poe's stories were not well accepted in his day because people were just not ready for them- they were too scary.

Many people don't know that Edgar Allan Poe also wrote stories about adventure on the high seas, buried pirate treasure, and a famous balloon ride. Poe invented the detective story with tales like "Murders in the Rue Morgue" and "The Purloined Letter". Sherlock Holmes and other fictional detectives would later be based on the characters that Poe created. Poe wrote love stories and even a few strange little comedies. He attempted to explain the composition of the universe in a way that sounds a little like quantum physics. Explore this site and you'll see why I think Edgar Allan Poe deserves to be recognized as one of the most original, imaginative, and ingenious authors of our society.

Poe wrote many stories on many different topics. If you don't know where to start, you can browse short summaries of Edgar Allan Poe stories, so you can find something that interests you. Don't worry, I don't give away the endings!!

This site makes it easy for you read Poe's stories. Poe knew several languages and had quite a large vocabulary. Poe's works are not hard to read but sometimes he uses obscure words or references that the average user may not know. Because of this, I've created an ever growing wordlist containing many of these words and their definitions. When a word in the wordlist appears in any story, it becomes hyperlinked to its definition. 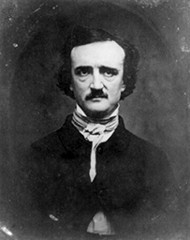 In the Gallery, you'll find a large collection of Edgar Allan Poe portraits and daguerreotypes. Learn the details behind each of Poe's commonly recognized portraits.

In the Poe Artwork section, browse a constantly updated selection of art from current artists who were inspired by Edgar Allan Poe, his poetry, and prose. Artists who have created paintings, drawings, or illustrations based on Poe or his works, are invited to contact me about featuring your work on this site.

The Gallery also features photography from various trips to Edgar Allan Poe historic sites, like the ones in Richmond and Baltimore.

Poestories.com was originally built by Robert Giordano in 2005 using 100% standards compliant HTML and CSS, written from scratch. In 2019, Robert updated all of the code to an HTML5 "Responsive" layout for phones and mobile devices. This site should work equally well in old browsers from 10 years ago, all the way up to the latest Chrome, Safari, Firefox, and Edge browsers. The site even works in Internet Explorer but why would you do that? Finally it means this site is fully functional with all styles turned off and is accessible to people with disabilities.

Enjoy your visit and don't forget to sign the guestbook.