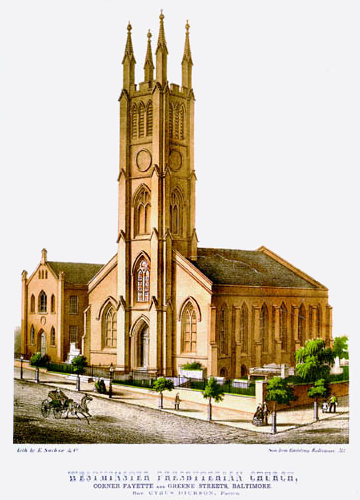 In 1852, Baltimore's government ordered the removal of all burials to areas outside city limits, unless they were on church grounds. Westminster Presbyterian Church was organized that year to preserve the old Western Burial Ground. Edgar Allan Poe was buried there three years earlier, in 1849. The church building was constructed on arches directly over the burial ground, creating the catacombs below. The church was completed in 1857. In 1977, the church was desanctified and is now used as a concert, dance, and lecture hall. The picture is a lithograph by E. Sachse & Co., 39 x 28cm, c. 1857